Successful interregional collaboration in the field of patents and health 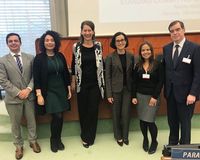 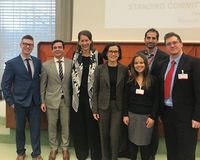 Switzerland introduced two proposals concerning the field of patents and health, together with Argentina, Brazil, Chile and Canada, to the WIPO Standing Committee on the Law of Patents (SCP). Both proposals were taken up in the committee's Work Program on 6 December, resulting in a successful interregional collaboration between countries with frequently opposing stances in the often controversially discussed field of patents and health. This is an encouraging step for Switzerland and its co-sponsors.

The SCP is responsible for normative work in the field of international patent law. The  complexities involved concerning the issue of patents and health is regularly discussed in the SPC.

Photo 1: Delegates from Argentina, Brazil, Chile and Switzerland (from the IPI: Beatrice Stirner, third from left)

Photo 2: Delegates from Argentinien, Brazil, Canada and Switzerland (from the IPI: Beatrice Stirner, third from left, and Reynald Veillard, second from right)

To this day, country names such as Switzerland, Suisse and Schweiz are being registered as elements...

Inspiring projects relating to innovation will be presented at the Swiss Innovation Forum (SIF) in...

The IPI is very pleased to present the second online workshop of the Center for Intangible Property...

Inspiring projects relating to innovation will be presented at the Swiss Innovation Forum (SIF) in...