When rockets fly into space and satellites orbit the earth, Swiss technology is often involved. We investigate the important role of patents in space exploration. 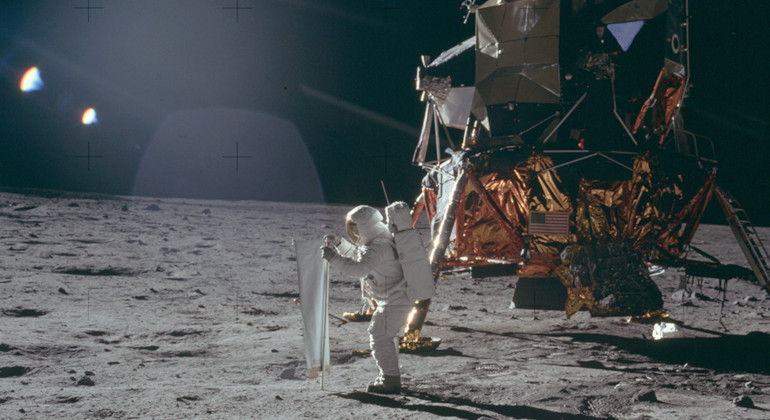 Flashback: shortly after landing on the moon on 20 July 1969, astronaut Buzz Aldrin placed the University of Bern’s solar wind sail on the ground. Image: Nasa

20 July 1969 marked a giant leap for mankind – and a monumental moment for Swiss innovation. During the first moon landing, astronaut Buzz Aldrin placed the University of Bern’s solar wind sail on the ground – even before the US flag. Over a certain period of time, this piece of foil captured particles of the solar wind, which were later evaluated on Earth. Today, scientists from Bern are still heavily involved in NASA projects.

The members of the Apollo 11 crew wore a watch by the Swiss manufacturer Omega on their wrists. The Velcro fastener of Swiss Velcro AG, a patented invention by George de Mestral of the Canton of Vaud (patent number CH339155), was an integral part of their space suit. Many other Swiss companies were also involved in the moon landing, as this article by the Swiss National Museum shows.

A look at the present day shows that, when it comes to space travel, Switzerland is still anything but behind the times. More than 50 companies are active in space thanks to their cutting-edge technology. The Swiss space industry generates annual sales of around CHF 290 million. According to the Swiss Aerospace Association Aerosuisse (in German), almost 1000 people work in this sector. The companies are suppliers and they specialise in the development and construction of subsystems (e.g. satellite components) for use in space.

Here are three examples of the numerous ‘hidden champions’ tinkering with trailblazing innovations:

There is a lot of movement in the space industry. Digitalisation creates needs and opportunities that are covered by satellites such as the Internet of Things, broadband satellites or communications. In the meantime, more and more private entrepreneurs are entering the market and commercialising it. "This is why, in this highly specialised industry, protecting innovation is essential and necessary for survival. Only patents can enable us to compete," says Peter Guggenbach, CEO of RUAG Space and President of the Swiss Space Industries Group (SSIG).