For an invention to be patented, it must be novel. But what exactly does this mean? We’re going to shed some light by explaining how even a comic strip can determine the fate of an invention. 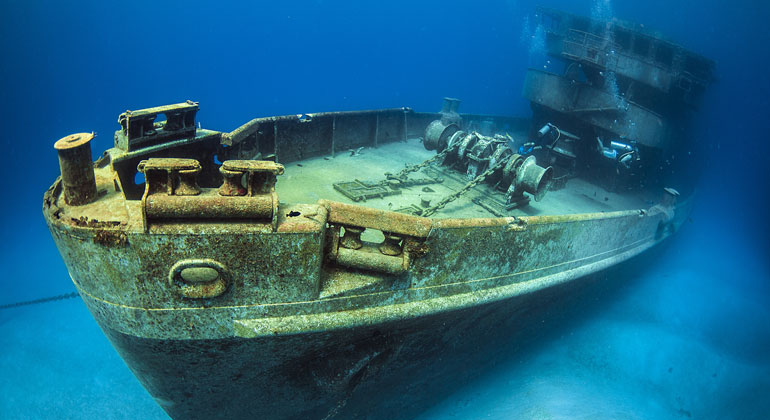 An invention that was created to recover the cargo of a sunken ship. Photo: istock

It all started off well for Karl Kroyer. The Danish inventor was contracted to come up with a new method of raising sunken ships. According to Kroyer, ships could be raised by pumping polystyrene balls or gas-filled plastic balls through a tube into the sunken ship. He could soon put the method to the test– a freighter carrying sheep had capsized off the coast of the city of Kuwait. The danger was that the carcasses would contaminate the city’s supply of drinking water.

“Denmark’s most clever inventor” (Spiegel 07/1971) filed the invention with the Danish patent office in November 1964. The protection was then extended to other countries, including England (GB1070600) and Germany (DE1247893B). So far, so good. In the Netherlands (NL6514306), however, the patent office threw a spanner in the works. Following detailed examination, one of their patent experts refused to grant the patent. The reason he gave was that the method was not novel. How was it not novel?

This method had already been described in a comic strip – long before Kroyer’s invention. The 1949 comic strip “The Sunken Yacht” illustrates how Donald Duck, with the help of Huey, Dewey and Louie, uses the exact same method to raise a ship. They filled it with ping pong balls, but it was still the same concept. This is why the Dutch patent examiner took it seriously.

This particular case demonstrates how novelty is an unquestionable requirement for a patent application. There is no room for manoeuvre. The technical solution cannot be known anywhere in the world before the filing date. Where and how it is made known doesn't make a difference – it can be in a newspaper advertisement, a blog, an essay, a speech or even a comic. In IP jargon, anything that compromises the novelty of an invention is referred to as being 'prejudicial to novelty'.

Obviously, it’s not too often that an invention can no longer be patented because of a comic book. Unfortunately, it’s more likely that inventors will deprive themselves of the chance to reap the fruits of their labour. The act of inventing something can induce such euphoria that all you want to do is tell the whole world about the discovery. Before you know it, a blog post is written and the work is published in a journal. Posting a video on YouTube showing the innovation is a fatal mistake, and so is talking about it at a conference. All of these things negate a claim for patent protection.

The deciding factor is whether the invention has been made available to the public and all that matters is that there has been a possibility that someone has found out about it. Even a loud conversation with friends in a restaurant can be seen as ‘publication’ if somebody happened to be listening in. And even if you leave your patent application on the top of the Matterhorn and collect it the next day, you’re not doing yourself any favours. Of course, the chances of some hikers walking up to the top are slim, but there’s still a possibility. Once the invention is disclosed, its novelty is destroyed and can no longer be patented.

Which is why you should keep the invention to yourself, take a deep breath and think about the next steps (see infobox below).

Arguably, Karl Kroyer’s woes were kept to a minimum. Over the course of his career, the inventor accumulated over 300 patents (including Swiss patents for a frying pan and a pressure container) and became a multi-millionaire. In 1971, he commented on his work in an article in Spiegel magazine. He said that “inventing something is thrilling”. The inventor explained that “Scourges such as the destruction of the earth caused by our throwaway civilisation draw me in like a magnet; they make me obsessed with figuring them out and solving them.” Karl Kroyer died in 1995.

The Donald Duck story is one of the most popular because it vividly illustrates what can be prejudicial to novelty.

Drawings are what give inventions a face in patent specifications. Sometimes, they are even mini-masterpieces. Once drawn by hand, they have long...

A dental implant inspired by seashells

Seashells inspired a dental surgeon to rethink the design of implants. The story of an idea that resulted in both a patent and a start-up.

Compressed air is mainly used in industry. But is it also possible to fuel a car with it? This is what three young people wanted to find out with...